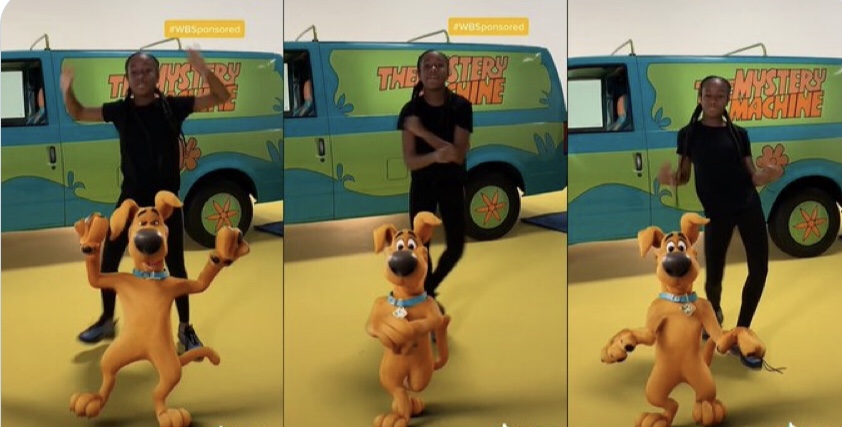 Fans across the country are jumping on TikTok’s #ScoobDance challenge, launched May 3rd by 14-year-old TikTok celebrity dancer Jalaiah Harmon with original music from Movers+Shakers, to celebrate the upcoming May 15 Home Premiere of the animated feature film “SCOOB!” Sharing content and making their own videos, creative choreographers, families, dogs, and people who just love to dance on the internet got into the spirit with Scooby-Doo and Jalaiah or created their own original moves to the tune of more than a half billion views in less than two days and have now crossed an amazing 1 billion—and counting —in just over three days.

Marking her first official brand partnership since choreographing the viral “Renegade” dance craze, Jalaiah’s performance is driving the bulk of the conversation, with another original piece by @JustMaiko also leading the pack with more than 785,000 likes, so far.

There’s still time to join the fun and invite yourself to the party, as TikTok’s #ScoobDance challenge runs through May 8.

On May 15 the brand new, fully animated, full-length action adventure “SCOOB!” will be available for a 48-hour rental via Premium Video On Demand for $19.99, or premium digital ownership for $24.99, beginning on Friday, May 15 (prices listed SRP). The title will be available on participating digital platforms. For more details please visit https://www.watchscoob.com to preorder your copy now.

“SCOOB!” reveals the never-before-told story of Scooby’s origins. It shows how one of history’s most famous friendships began when an adorable, homeless puppy met a lonesome young boy named Shaggy, and how the two of them joined forces with aspiring young detectives Fred, Velma and Daphne to become the celebrated Mystery Inc. Now, with hundreds of cases solved and adventures shared, Scooby and the gang face the biggest and most challenging mystery of their careers: a plot that will unleash the legendary ghost dog Cerberus upon the world. As they race to stop this “dogpocalypse,” they discover that Scooby has a secret legacy and an epic destiny greater than anyone imagined. Ruh-roh!

It was directed by Warner Bros. animation stalwart Tony Cervone, an Annie Award nominee for the feature film “Space Jam,” two-time Emmy nominee for his work on “Duck Dodgers” and one of the creators of the popular Scooby-Doo series “Mystery Incorporated.”

A presentation of Warner Bros. Pictures and Warner Animation Group, “SCOOB!” is rated PG for some action, language and rude/suggestive humor.